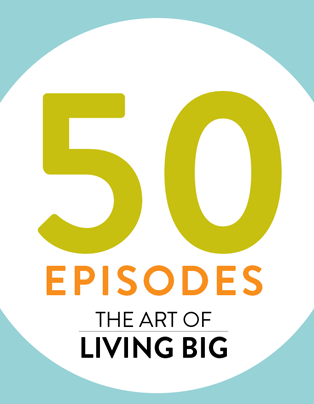 Join me as I get overly excited about all my past guest and share with you the future of The Art of Living Big!

It’s time for YOU to be part of the action, so join me inside The Live Big Lab by heading to www.LiveBigLab.com

I can’t wait to get started on this next part of the journey with you!

I can’t even believe it’s been 50 episodes. So cool. Yay. Thank you guys for continuing to listen to be here with me on this journey. I’m super pumped, because today I’m going to share with you a little bit about what’s been happening behind the scenes when some of these interviews have taken place. And then what’s coming up? Um, yeah, what’s coming up for season two of the art of living big. All right, so let’s just talk about how much fun this has been. I am so so grateful. I’m grateful to all the people that listen every week and send me good feedback, those people that have gone on and taken the time to put a review on iTunes. So awesome. I don’t know that it matters to iTunes. But it matters to me. And so I appreciate that. And all the people that are in our awesome Facebook group, if you’re not in there, jump in, you can get to it. But just by going to s s lB community.com. It stands for start small, live big community.com or just head right to my website. And you’ll see I need community right there on the front page. So I am just so so pumped. Okay, so here’s what I want to do. I want to talk to you a little bit about what’s been happening with me sort of behind the scenes in terms of this podcast, and then what’s going to be coming up for season two. And I know you’re thinking like season two, what makes it Season Two? Well, just because it’s Episode 50, and I decided it would be Episode 50 would be season two. So it’s season two, I made the rules for that. I don’t know if that’s an official thing. But it’s going to be the start of season two. So this podcast has been so so much fun. And when I look back over the last 49 interviews, it’s really I can almost see the evolution of myself and the things I was interested in and wanting to explore further. And I’m so grateful to the guests that came on because we had some really, really, really kick ass guests. Can I say that word on the podcast? I don’t know. I’ve never done that before. Okay, we’re just going to keep going with it. But we have had some pretty cool guests. All right. So let’s I’m just scrolling through my phone looking at them. I mean, Dave Smith was the episode number two about how to live a healthier life. I mean, he and I are such good friends. Now. It’s so funny. I had Chelsey Densmore on from live your legend, which was somebody that I you know, watched from afar and admired and it was so cool to have her on. You know, I had Reni Curran who was an NFL football player. He’s an author now and a speaker, Colby Martin, who was the preacher that was an evangelical preacher and changed what his views were on homosexuality. And that was such an interesting book and such an interesting interview, just how somebody could open their mind and see a different way and be willing to see a different way. Just so cool. That interview with Heather flippo it’s that lots of people loved that interview and also with heather gray, that the Heather’s that Heather’s were were really great interviews. Oh, gosh, I’m just like scrolling. They’re also good. The EFT one with Bill double doval is that EFT is such a cool practice. And he does such an incredible job of explaining it in that interview. It’s interview number 17. Check that out. If you’ve had any kind of trauma or anything you just want to heal or get over with. I use EFT now, almost on the daily and I use it with my daughter to

PrevPrevious049: Taking care of your WHOLE body with Dr. Michelle Robin
Next051: Clear out the clutter in your life & create more ease!Next
It's been 24 months since I last got my hair color